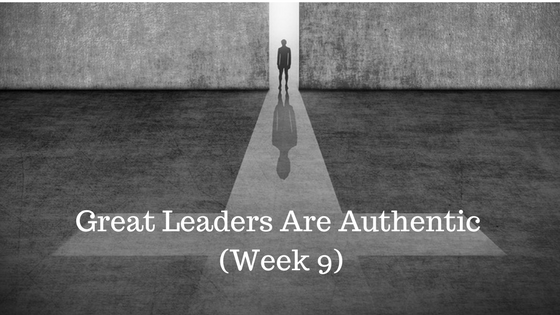 But when they persisted in asking Him, He straightened up, and said to them, “He who is without sin among you, let him be the first to throw a stone at her.” – John 8:7

In week 2, we discussed how great leaders are very self-aware.  They are aware of their strengths and their weaknesses.  In knowing their weaknesses, great leaders know that judging others is not only useless, it is also hypocritical and a total waste of energy (see week 6).  Jesus knew this, and he taught this concept as such.

Merriam-Webster defines the word “authentic” as: “worthy of acceptance of belief as conforming to or based on fact; not false or imitation; true to one’s own personality, spirit, character”.

How can anyone possibly be authentic if they are not aware and humble for their own shortcomings?  And, how can anyone that has such awareness judge others?  These actions are in direct conflict with being authentic.

In 2010, an extensive study was done by Green Peak Partners and Cornell’s School of Industrial and Labor Relations.  The research examined a number of executive soft skills, but one of the findings was of particular interest to me:

“Leadership searches give short shrift to ‘self-awareness,’ which should actually be a top criterion.  Interestingly, a high self-awareness score was the strongest predictor of overall success.  This is not altogether surprising as executives who are aware of their weaknesses are often better able to hire subordinates who perform well in categories in which the leader lacks acumen.  These leaders are also more able to entertain the idea that someone on their team may have an idea that is even better than their own.”

An interesting finding, but not at all surprising.

Authenticity is the honest expression of one’s thoughts and feelings.  Many of us are very touched and enthralled by people that are experts in expressing their emotions.  We love watching athletes celebrate (see week 8) a championship.  We empathize with and experience feelings for someone who is weeping.  The fact is, we are attracted to people that are free and honest with their emotions because it is authentic.  We experience a level of trust with those people, and we experience a connection because we often times relate to them (and/or wish we had the courage to show our own emotions).

Today, we live in a very repressed society that is often negative on people who show too much emotion, yet we idolize those that actually do.  It takes a certain amount of courage to allow your emotions to flow freely.  It creates vulnerability.  And, vulnerability is directly in line with being authentic.  We are all very vulnerable, even though we like to lie to ourselves that we are not.

This vulnerability and deep feelings of emotions can be very powerful.  And, they can be even more powerful and troublesome if we keep them repressed.  Repressed emotions can lead to things like anger, resentment, depression, and anxiety.  The fact is, God gave us emotions.  And, when we repress them, it is dangerous.

Jesus expressed himself aloud and often, shattering the idea that a “strong” leader is completely monotone and in control of his emotions.   Now, this doesn’t mean that it is healthy to act out or express destructive emotions.  Rather, I am speaking about allowing emotions to be felt and to pass.  And, not pretending that they don’t exist and/or not discussing them.

Personally, I find the passage in Matthew 21:12-13 to be incredibly impactful on my own faith:

“And Jesus went into the temple of God, and cast out all them that sold and bought in the temple, and overthrew the tables of the moneychangers, and the seats of them that sold doves, And said unto them, It is written, My house shall be called the house of prayer; but ye have made it a den of thieves.”

This is a very interesting passage of scripture, and it is very descriptive such that you can create a vision in your mind as to what this must have looked like.  Jesus was obviously feeling anger, and he was expressing it in what we must believe is a righteous and healthy way.  I have to believe that the disciples saw this and found it to be very authentic.  Jesus was obviously teaching us that experiencing emotions is exactly what God intended, and that to repress them was not good.  The Bible also describes a situation where “Jesus wept.”.  Jesus did not repress his emotions, he felt them and expressed them openly.

Every message has an emotional component, so leaders must learn to articulate and express their emotions.  Furthermore, great leaders, like Jesus, create authentic relationships by expressing interest in their people and showing empathy.

“Great leaders move us.  They ignite our passion and inspire the best in us.  When we try to explain why they are so effective, we speak of strategy, vision or powerful ideas.  But the reality is much more primal.  Great leadership works through the emotions.” ~ Daniel Goleman, Richard Boyatzis and Annie McKee, Primal Leadership (Harvard Business Review Press, 2013)

A great leader, on occasion, has to be willing to allow himself to look foolish.  This is another component of authenticity.  The scriptures have a lot of examples of this, even beyond Jesus:

A deluded engineer (Noah) – designed and built an ark in the middle of a desert.

A lunatic (David the King) – acted insane to elude his captors

An improper woman (Mary) – had a child out of wedlock

A blasphemer (Jesus) – claimed to be equal to God

Bottom line – leaders must be willing to take risks and sacrifice their public image (for further reading, see week 5).

Want some real world examples?  How about Walt Disney?  Imagine him doing a pitch for financing in front of a conference table of bankers.   “I am going to build a multi-billion dollar empire on a mouse, a fairy, and some dwarfs.  Why would you not loan me money for that?”

I am sure there were a lot of laughs and gossip that followed those meetings.  Another hair-brained idea was something called “EPCOT”.  Everyone at Disney (even Walt’s brother Roy) thought this was a terrible idea, so Walt funded it himself.  Walt kept forging ahead with his vision, paying little attention to looking “foolish”.  And, now who looks foolish?  Certainly not him.

Here is the bottom line:  An unwillingness to look foolish is a severe handicap for anyone trying to be a great leader.  Anyone who overvalues others’ perceptions will be distracted from the mission.  Jesus never let himself get off his mission, and he was certainly willing to look foolish.  This was very important to his authenticity which leads to his effectiveness as a leader.  Riding into town on a donkey, fishing just to pay your taxes, and forgetting to bring wine to a celebration were all very foolish things in Jesus’ time.  Yet, he was ok with it.  He was willing to look foolish in order to fulfill his mission.

Great leaders cannot be afraid to look foolish.  Great leaders know that the mission is more important than keeping up any sort of public image.

There is little argument that authenticity is very attractive to all of us.  The difference between an authentic “Mona Lisa”, and a printed copy is undeniable.  We’re talking about $100 vs. more than a billion dollars.  When collectors purchase items, they are surely looking for a reputable firm to provide a “Certificate of Authenticity” in order to validate the huge price they pay.  EXACT copies, though not really different in the intrinsic value they provide, demand only small fractions of value as compared to the “authentic” originals.

The same applies when dealing with leadership, as Jesus showed us.  Nobody truly wants to follow or put their full faith in a leader who is not authentic.  Admittedly, people do follow some pretty bad leaders, but I believe these people are following for reasons that are not related to passion, mission, or some other good cause.

We are naturally wired to appreciate and put a high value on authenticity, and Jesus certainly taught us the importance of authenticity as it relates to being an effective leader (and an effective person).

Leaders could learn a lot by following Jesus’ example of being authentic.

Follow Me
Dan Lucas
As the President and Founder of Credo, Dan advises clients with a strategic CFO mentality, in all aspects of accounting, finance, tax, operational strategy and best practices. He also directs the Credo team in establishing the strategies for the growth of the firm and continually raising the bar on its standards of exceeding clients’ expectations.
He has accrued broad financial experience working with companies ranging in revenues from $50,000 to $60 billion.Dan has worked with technology services, software, real estate, retail, manufacturing companies, professional services firms, marketing/advertising agencies, dental practices, medical practices, and various other industries, providing each with the specific financial guidance needed to establish sustained business growth and financial health.

Follow Me
Latest posts by Dan Lucas (see all)